Posted on September 19, 2018 by awishcalledwanda

Celebrating a high school reunion provided a day filled with memories, friends and education. Even though this was a 55th class reunion, we are still learning.  Our day began at the Gettysburg visitor center, meeting and greeting and then to watch a Civil War film.  This day spent recalling Gettysburg history was very fitting since our class of 1963 was the centenial celebration of the 1863 war on the first three days of July of that year.

Later we viewed the Cyclorama painting of Pickets Charge.  I remembered seeing this painting in high school, but with a couple of million dollar refirbish job it looked brand new.  The thing that stuck in my head when viewing the painting years ago was that the artist did a self portrait of himself in the painting, instead of a signature. After the presentation that did not mention this, I asked one of the guides. He showed me where it was.  Dressed as a union soldier the Frenchman was standing against a tree holding an open sword across his knee.  Everyone around him was engaged in battle, he however, was just standing there as though he was an observer, which, I guess he was.

Our next stop was the Dwight D Eisenhower farm.  It was a beautiful day and the first one we had in a couple of weeks, so it was a treat to be out and about.

But first a peek inside at the home where the Eisenhowers lived in the 1960’s. The formal living room showcased gifts the Eisenhowers received from friends and heads of state all over the world.  I liked this unusal couch like piece of furniture that, we were told, Mamie liked as well.  Ike, as he was called considered the room to stuffy and preferred to spend time on the porch where he enjoyed painting.

It was lovely outside and we walked the path where Ike liked to walk with his friends and every one that he invited to the farm.

In the showbarn we saw pictures of Winston Churchhill and Charles DeGaul in the same place where we were standing. 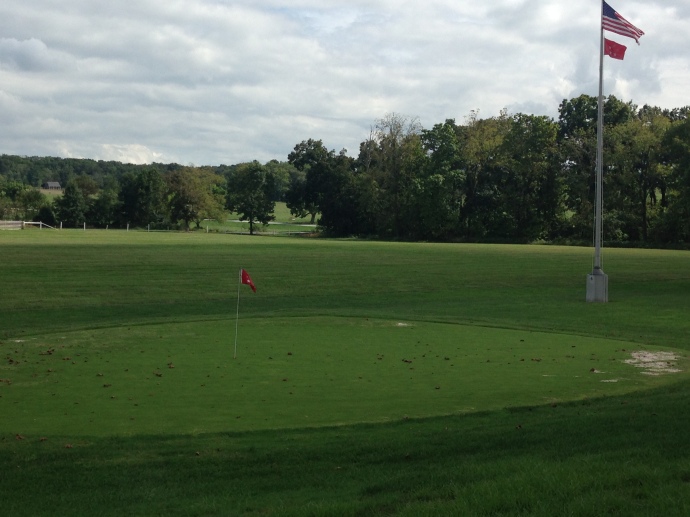 He was quite a golfer and had a putting green in his back yard.  The flag is that of a Four Star General.  We learned that one of our class mates was a caddie for the President on occassion when he golfed at the Gettysburg Country Club. 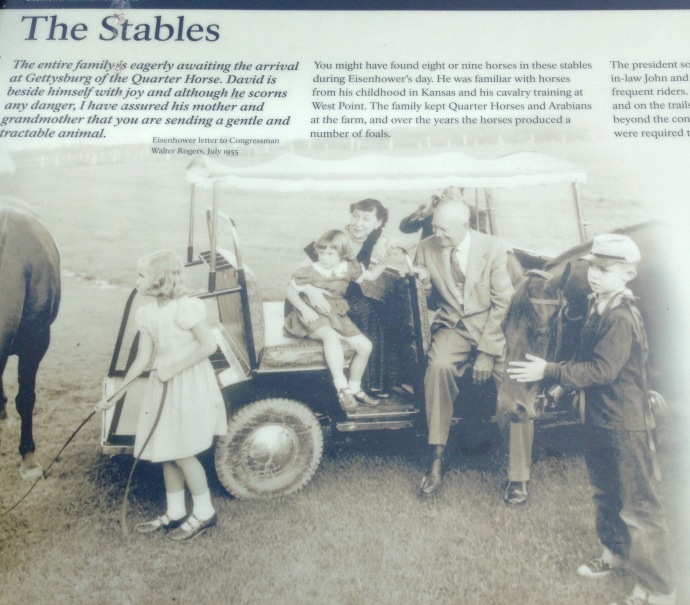 We walked past the stables and googled eyed the old classic cars in the garage.  Among the golf carts and other classics was his presidential limosine Imperial.

That evening we had dinner at the Dobbin House and a brunch on Sunday when our foriegn exchange student from Guatamala attended.

She brought along a scrap book from her year in Gettysburg.  This picture of prom attendants was reinacted as both of them were at the brunch.

It was a great weekend.  I love our class reunions, I think the only one I missed was the 5th reunion as I was still out of town.  Now 55 has come and gone.  “How are you?”  Was a frequently asked question. The answer I liked the best was “I’m upright and thankful to be so.”  Yes! Yes I am.