Phil-la-del-phia Here we come, Right back where we started from.

On a recent trip to the green, green isle of Ireland, we left Philadelphia and certainly expected to return, but not in the middle of the same night that we left. But that is exactly what happened. At the time it was concerning, then frustrating and very, very tiring. In a backward glance, we are thankful that we were never in danger and now it makes a good story, one everyone who travels needs to realize that these things can happen and we have to count it as all part of the adventure.

Two and a half hours into our flight to Dublin, this is the turn of events of our flight pattern. We left Philly at 9pm and had just finished our hot meal at about 10:45. Settling down for the long trip, I played a little trivia before being booted out of the game for not getting enough right answers, then it was nap time.  At 11:30 the announcement came over the PA system that we would be returning to Philly because the plane’s computer system was not giving the right signal to allow crossing the open ocean.  At the time I thought, “well it beats landing in the middle of the ocean.”  We arrived back in Philly at 2:45 AM, to stand in line until 6 AM.  We were able to get another flight into Shannon at the same time the next night.  That meant spending our first planned day in Dublin in a hotel in Philly, trying to get some rest and making arrangements for the change in plans.

I was traveling with my long time friend and coworker, Gale, and her two grown sons.  It was a trip we had been planning for over a year, and it was difficult to decide what had to be scrapped.  We tried to make arrangements from Shannon, but the price to rent a car the next day more than doubled and we decided to enjoy the train ride across the island and pick up our plans and previously rented car there.  While we were getting some rest and changing plans the boys slept for a time then called an uber driver to downtown Philly, got an authentic Philly Cheese steak sandwich and walked around Independence Hall giving the younger boy his first view of the Liberty bell. Since we spent more time in the airport than we had ever imagined I got this shot of the famous bell on one of many “airport walks.”  However, I was in no mood for a selfie.

We arrived in Shannon, found a bus to Limerick, which put us on a train to Dublin. In Dublin we needed to find a metro to station Connolly that would take us to Dun Laoghaire, and just before that metro bus stopped we realized we needed to get off that one and catch a local metro to the station at Sandy Cove which was near our bed and breakfast. In haste to depart, one of the guys left his backpack on the metro, which was well on its way as we just made it out the door when realized his pack was still on the train.  The one with his passport in it.  While he reported it right away, there was nothing more to do but go to our B&B and take in some of the local sites.

After meeting Mary, our friendly and very helpful hostess, we walked the short distance to the local “Fish Shack” recommended by Rick Steves whose travel guide made our trip planning much easier.

A walk along the local water front eventually brought us to a place where the locals hung out enjoying their first warm April day.

We too were enjoying the warm weather as we had left rather wintry conditions in Pennsylvania.

A few brave souls were running in and out of the water in this small beach area. I am sure that water was anything but warm. We were told that it had been cold and rainy until two days ago, but today the sun was out and the temperature hanging around the mid 60’s.

Interesting shell sculpture.  Later we saw small replicas of these for sale in the gift shops.

In Mary’s home I recognized this painting as the place where we had just walked the evening before.  The round tower is known as the James Joyce Tower and now a museum that holds many of his writings.  The tower was originally constructed to repel an invasion from Napoleon forces, but years later became famous when Joyce used the tower to set the opening scene in his popular novel “Ulysses.” The museum, that is free and open to the public gives a panoramic view of the Sandy Cove area if you are willing to climb the narrow, spiral staircase to the top.

With no word on the finding of the back pack with the passport, our only option for the next morning was to make a visit to the US embassy in Dublin. While we waited outside, Corbin found it a unique and interesting experience to have a first hand look at the operation of a US embassy in a foreign country. 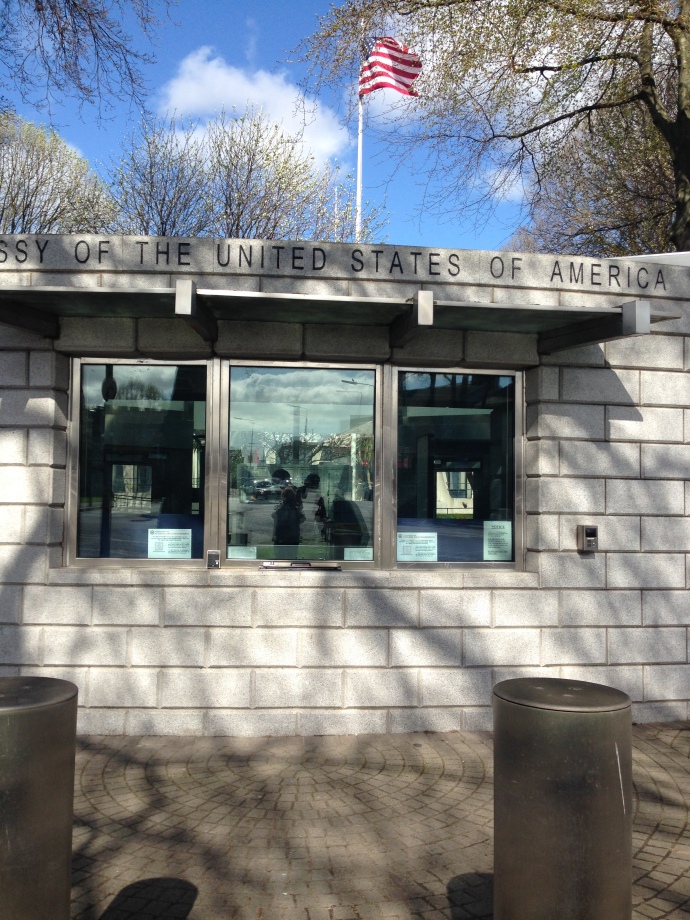 Because he had a copy of his passport in a different location, he was able to leave the embassy passport in hand about 3 hours later. He had an interesting story to tell about a lady who had no identification with her, lost her passport when she laid her backpack down at the Cliffs of Moher. She said it was very “rolley polley” because she had it stuffed with sweaters, and it rolled right off the cliff into the ocean below.

Later we saw where that might have happened. Looking at this part of the Cliffs of Moher where there are no guard rails, I guess there is no way you would want to chase a rolling backpack. Staying on the pathway is highly encouraged. The ocean is indeed at the bottom.  More on these gigantic cliffs later.

After several phone calls with promises of return phone calls that never came, we continued our trip without the backpack.  On Sunday, however, we were surprised by a phone call to the B&B we rented on the Ring of Kerry.  The message was that the pack had been turned in to lost and found by a cleaning man.  Upon inspection they found the phone # to the B&B on an itinerary I had given to Corbin when we landed in Shannon.  The bag was intact, containing his passport and a computer.  We were to pick it up on our return trip to Dublin on Friday.  Frustration dissipating, our trip continues with thankfulness settling in. Always look on the bright side.  God is Good.

Look for castles, cliffs and caves in coming posts.