Memories from 20 years ago

Posted on October 14, 2015 by awishcalledwanda

Read the second edition of what might have been Chapter 15 to “A Wish Called Wanda.”  The post is taken from my journal written while on a trip Dick and I and our friends Karen and John took in 1997 to Oahu.  This was our first visit since we left in 1968.  The pictures in the post are from the recent trip I took this past April.

After a quick and late dinner at a Subway shop on Kalakua Avenue, Karen and John continued up the street, but Dick and I were anxious to see Saratoga Road that was just a few blocks away.We started walking down the street and I was walking on air. I began to recognize some of the smaller hotel/apartments including the building where I made that first phone call home to mom the night Chris and I arrived. Parts of the phone booth were still there but no phone.

(No phone booth now, but this is the place. Note the cell phone in my pocket, how times have changed.)

There is a large Post Office building on the De Russy property where the NCO club used to be. As we neared the 245 address, I could see the three palm trees that bowed out over the sidewalk and
grew right in front of our living room window, were still there. 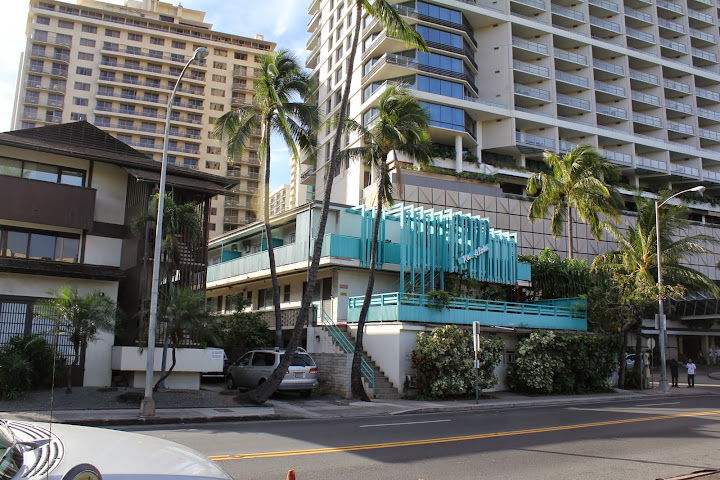 The apartment building is gone and in its place is a modern, nondescript two-story building that is some kind of a meditation tea room. The present building also encompasses the space that was our courtyard. The Kai Aloha Hotel at 235 Saratoga is still there and has the same kind of lanai enclosures that I climbed up to get into our room. The entrance to De Russy has changed, the beach is still there, but looks less accessible than we remember. 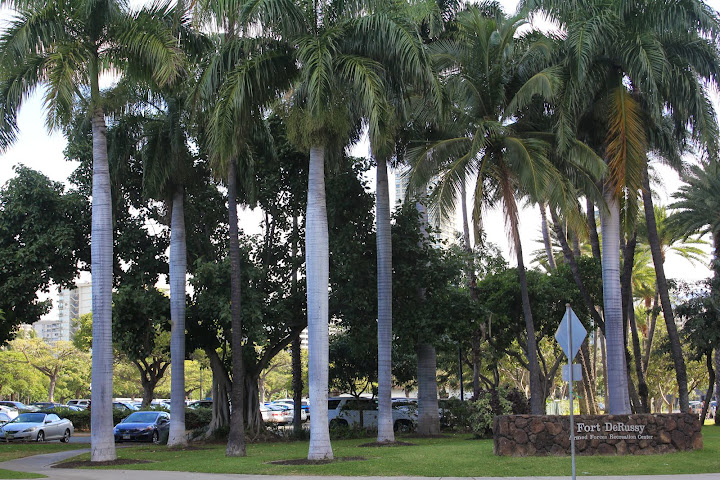 We turned around and met Karen and John at the other end of the street to walk back to the hotel. The streets are crowded with Japanese tourists. It was just before ten pm but we were all ready to crash. Karen and John take the bedroom and we have the living room which works out fine, because Dick likes to watch the late news, and John gets up before we know it is morning to get a daily paper.
The next morning he quietly walked into the kitchen, deposited his goods, and slipped into the bedroom just about the time Dick and I were beginning to stir. It was still early but warmth and light flooded the room making it easy to wake up. Along with the newspaper, John bought some eggs, bread and a fresh papaya. Yummy for breakfast on the lanai. We lingered over the papaya and made plans for our first full day. On our way out made reservations at the desk for dinner and the show at the Polynesian Cultural Center.

We drove around the back of Diamond Head and soon made a stop at the school where Karen had taught. She said it really had changed little. From there we continued to Kokohead.

We wanted to stop at Hanauma Bay, but just got a quick look as it didn’t open till noon and there was an entrance fee. Go figure.

We did stop and look at the still familiar Sandy Beach where I lost my sandals and hairdo one night, and near by Makapu where I spun around like a top trying to body surf, nearly loosing the top to my swim suit so many years ago.  (Yea, you really should read the book, it’s a lot of fun)

Back on the road, our navigator kept referring to an old Hawaiian Catholic Church near Punalu. It was on the same road we were on and that would put it very near the place we spent our honeymoon. Twenty nine years ago the trees and bushes were thick around our cottage and we didn’t see much of the church, but we were awaken by the ringing bells and could hear every word of the Latin mass.  Now, it was our best land mark, for spotting the honeymoon cottage and all eyes were on the highway looking for the church.
Dick saw it first, but just as we passed it. John turned around and parked across the street. There was a cottage just beside the church with a yellow caution tape around it. The cottage had been burned out but it was still recognizable. We knew right away that we were in the same place we came to that Saturday night in 1968. We crossed the yellow tape and looked around a bit. The tire swing where we had a picture taken was gone, but the beach was still accessible. We recognized the entrance way, and had a grand picture-taking time not getting to close to the now dilapidated structure. Perhaps this was the reason the trip worked out to be on our 29th anniversary rather than our 30th. I am sure the buildings were taken down shortly after our visit.

We drove on and on taking in the beautiful mountains and ocean views, stopping for lunch at a state park with a view of China man’s Hat Island in the distance.

Lunch break was short as the rain came in just as were finishing our tuna sandwiches. It was a passing shower – over before we got out of the park. Around that same area we stopped at a road side stand and bought some macadamia nut cookies, a papaya, a few small bananas and some Aloha Iced Tea.  Seeing the crouching lion brought back many good memories as well.  Can you spot him?

Next time visit the lovely Polynesian Cultural Center, always changing, still the same in many ways.

Thanks to Lisa for contributing some of the pictures for this post.