Memories are made of this

Posted on October 7, 2015 by awishcalledwanda

I have always thought about doing this, but then wondered if it was a good idea.  Today I decided to try it.  This could be chapter 15 of my book “A Wish Called Wanda,” but in the end decided not to include it. I just kept thinking that someday I would blog it.  Today is that day.  The pictures of Hawaii used in this blog will be from my most recent trip in April, however the story is from 1997, our 29th wedding anniversary.  I hope you enjoy each short segment of this unusual post.

The Years have passed,

the kids are grown, so

we’re going back to where

the love seeds were sown.

It was the year that Dick and I started dating again. Not that we had ever stopped “seeing” each other or that we made a drastic change in our normal routine, but because I worked a lot of three to eleven shifts, when we did have an evening to spend together, we called it a “date.” That simple adjustment with a bit more concentration on paying attention to one another led to some great times on our “dates.” Most of them consisted of watching a movie at home or one of our favorite TV programs. Sometimes Dick would make us a cup of tea and a special dessert we call coffee cakes.

In early April of that year, my friend, Anna and I purchased tickets to the musical play “Forever Plaid” at a local theater. Since Dick was taking me to Hawaii for our 29th anniversary, I wanted to do something big also—–OK——not as big, but this was to be a really nice date. The tickets were for May 30th 1997, just two days before our 29th anniversary.

On the big night Mel and Anna, and Dick and I met up with another couple, and had a nice dinner at a restaurant on the way to the theater. The show was excellent, bringing back teenage memories with songs from the fifties. We laughed so hard our faces and stomachs hurt. Dick and Mel, not your regular enthusiastic play goers, laughed and enjoyed the antics and old songs as much as anyone. On the way home we drove into Gettysburg to the Lincoln Dinner for dessert, and did not get home till midnight. This was a real date for empty nestors!

Now all we had to do was wait for the long time in the planning trip to Seattle for Dick’s nephew’s wedding on June 21st.  We had written my former roommate in Hawaii (in 1966,) Karen and her husband John asking them to make the trip to Hawaii with us as they lived near Seattle. Her first response to our quite unexpected letter, explaining the wedding, and the fact that we were half way there being on the west coast, was simply a card with nothing else on it but a huge lettered YES! I danced with delight the day it arrived.

It was fun to be with the grandchildren on their first flight. The captain welcomed them aboard by name, and while we were flying through the clouds, five year old Zachary looked up at his mother and asked, “Are we in heaven yet?” The snacks kept coming, but Zach and Jake were hungry and fussy by the time we landed in Seattle. We kept promising them food. A trip to the local fish and chip place was the first thing on the to do list after landing. However, as soon as the boys got in a moving car they fell fast asleep and did not awake till breakfast time.

We had four days in Seattle and made the most of them. We spent time with Dick’s family, attended the wedding, took the kids to parks, the zoo and the waterfront aquarium. On that day Jake had three bananas he wanted to take along to feed the sharks and he wouldn’t be talked out of it. When we exited the first building he saw a body of water he decided it was time. We broke off a shark sized piece of banana and let him throw it in the water. We were in the midst of telling him that a shark would surly come up and get it sometime, when a seagull swooped down and picked it up. We think that the gull almost choked on it, because of its size, and it also looked like he had never tasted banana before. Jake got a big kick out of the whole episode and it satisfied his desire to feed the sharks.

Very early Tuesday morning we were meeting Karen and John at the airport and the rest of our family were leaving later for home. We had said our good-byes to the kids going home, and to Dick’s family on Monday night. In the morning we were saying Hello to our big new adventure, and our long time friends.

Every time we made a trip to Seattle, which we had done several times over the years, we made a point to see Karen and John. They always lived somewhere close Seattle where we could spend a day of our family time with them. So Dick and the kids had gotten to know them through these visits.

We landed in Honolulu in the late afternoon, following the five hour flight across the ocean. It was warm and sunny, we picked up our luggage, and a Buick at the rent a car. John volunteered to drive, Dick was happy to navigate. We headed for Waikiki.

My first overwhelming thought was, WOW! Things are really crowded. There were major freeways and buildings everywhere, while I remembered, two lane highways and a lot more open space. Our condo was right in the heart of Waikiki beach area, on Kuhio Avenue. We had a one bedroom, with a hide-a- bed couch in the living room and a small kitchen, on the 26th floor. Standing on our lanai was quite windy, but the view was wide spread, overlooking the distant mountain where, years ago, we would drive late at night to gaze on the lights below. Now that same hillside was dotted with houses all the way to the top. To the right we could get a glimpse of the ocean. 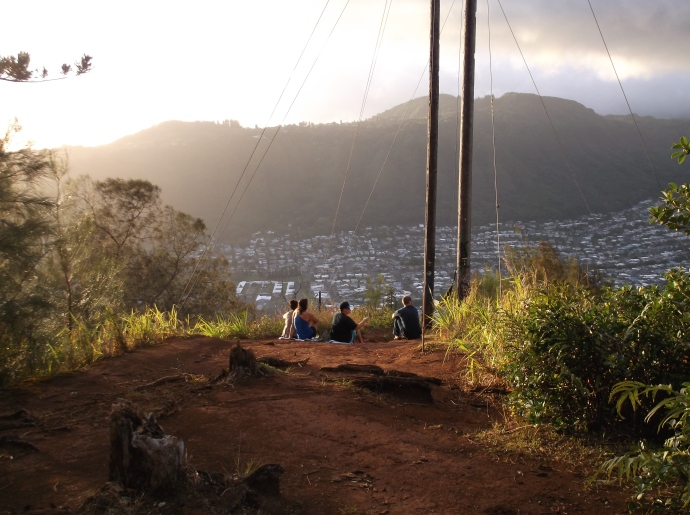 We took a little time to settle in then went out for a walk straight up our old stomping grounds of Kalakua Avenue. Karen and I were giddy. As she was pointing out things to John he had never seen before, Dick and I were looking for familiar things. The street names were the first things that came back to us. Kuhio Beach was right across from where we came off of our street and remains the main public beach on Waikiki. We recognized the Moana Hotel and the Royal Hawaiian which is still low and pink while squeezed in among the high rise hotels around it.

The International Market place has changed from a surreal, exotic walk in the park with cute little shops and open air jazz and piano bars, to a crowded touristy, trinket shop stop, but is still at the same place. 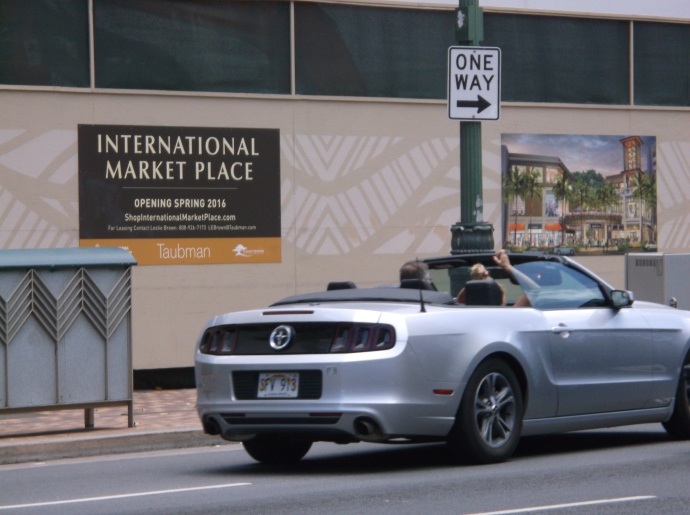 This is what International Market Place looks like in April 2015.  Perhaps progress has been made to restore it to a semblance of what it was in the 60’s.