Why not take the train?

Posted on October 28, 2014 by awishcalledwanda

We wanted to make a trip out west, visiting two states.  Multiple stops in an airplane is not that feasible especially when the states are as close as Northern Washington and mid state Oregon. We had the time, and the money was better than a plane fare. So we began to ask ourselves, “Why not take the train?”  With a little research and a trip to our travel agent we booked our reservations on Amtrak.  We started by spending a day in beautiful, historic Harper’s Ferry in West Virginia where we would catch the first leg of the trip to Chicago. 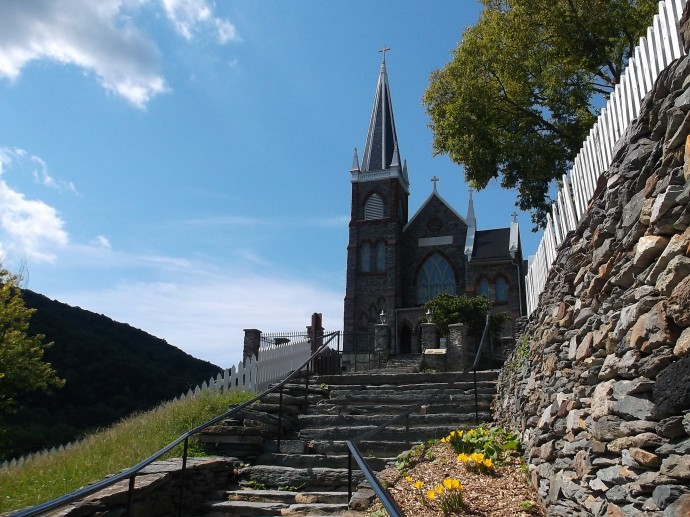 The iconic, majestic church on the hill is one of my favorite spots.  We arrived early to be sure of getting a parking space and had much of the day to browse the shop and restaurant laden streets.

And enjoy the “nearly Fall” scenery on a pleasantly warm September day.

Not to mention the handiwork the locals.

We got off to a late start, as our train was delayed while trying to fix a cable of some sort.  We waited and remained in good spirits declaring, “It’s all part of the adventure,”  as the train finally made its appearance.   We did not choose to have a sleeper car, so our night’s rest took place in these roomy lounge chairs.

The morning past and so did the farm lands and small towns, as we watched out our larger than life windows. The train came into Chicago just in time to catch our train to take us farther north-west.  Part of the adventure is wondering if you will make the next train. 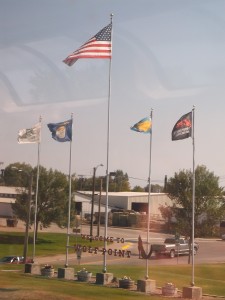 Mountains and rivers dominated the window viewing for most of the next day. 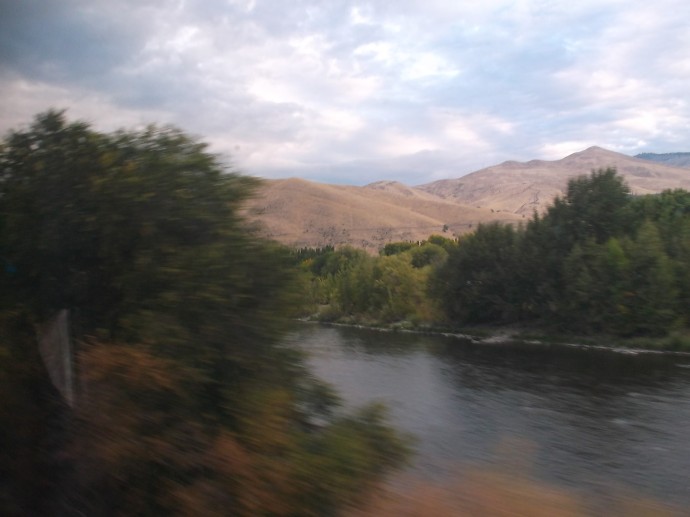 We arrived in Seattle, spent a week with relatives and attended Dick’s fiftieth class reunion.  Back on the train to head for Eugene, Oregon. 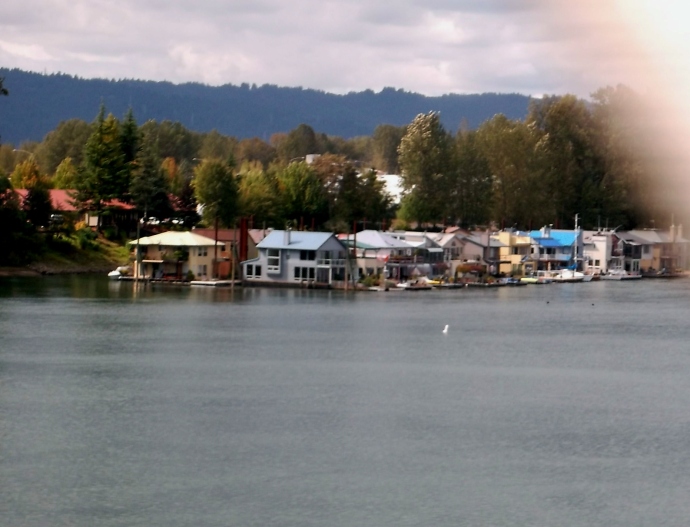 After the weekend stop in Eugene, the train headed south to Sacramento, CA.  There another surprise adventure awaited us.  Our train was held up and in need of repair.  We would have lots of time to see the sights in the old town district of the city located within walking distance of the station.

The long ride home was marked with sunrises, sunsets, numerous delays and hours in the dome car. 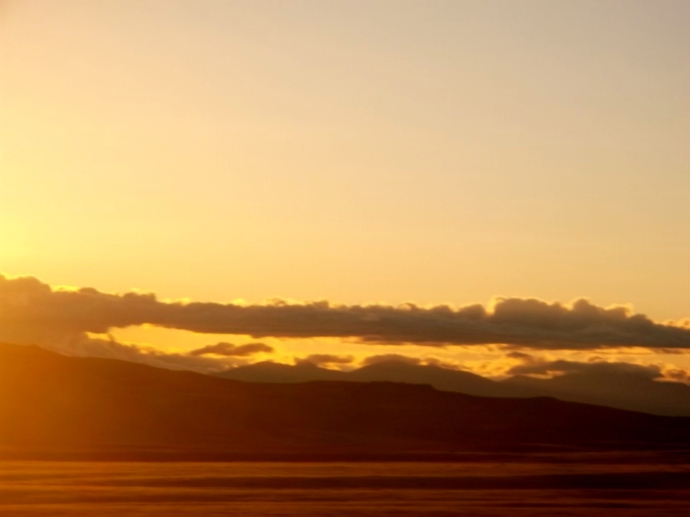 Waiting becomes an art, even when it’s drizzling outside.  This is called “waiting patiently.”  I woke up when we heard the whistle blow and at the same saw a guy on a bicycle whizzing by us.  We soon realized that he wanted to beat the train to the crossing.  When he knew he was not going to make it, he lifted the bike onto his shoulder and bolted across three sets of tracts as the train was coming very close.  At the next stop we got stickers and a train whistle promoting train safety.

Utah was my favorite state, as in a nice place to visit.  The rock formations just kept coming and I just kept snapping. 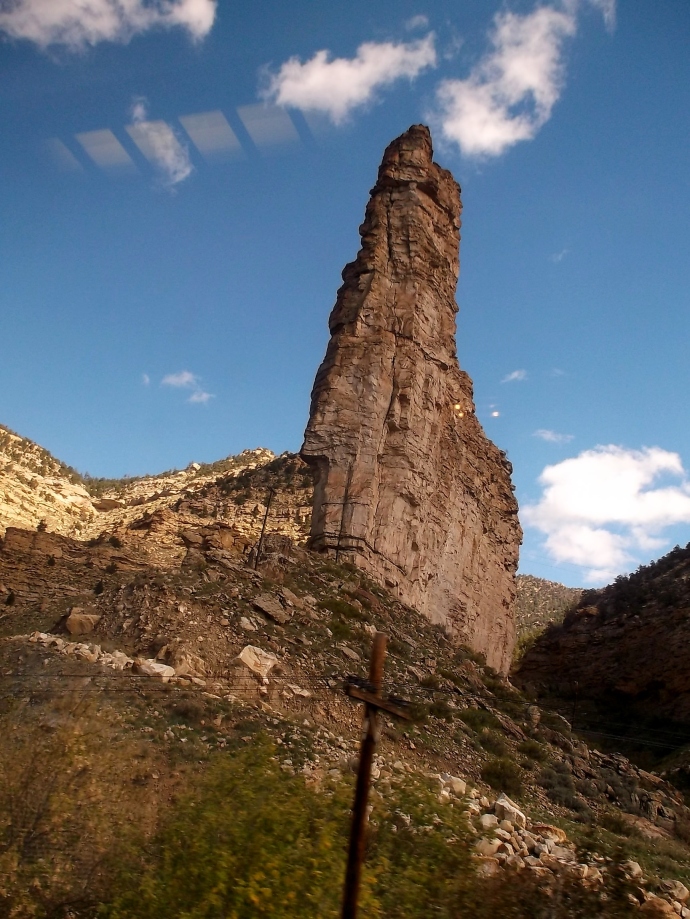 The dome car has mega windows and is a fantastic place to meet people and take picture after picture of anything that catches your eye.  You have to be quick, for taking pictures from a train is like trying to catch a butterfly.  When you get close enough, it’s gone.  Entering Colorado.

Colorado was more red rock and great views, that is until nighttime overtook us and we spent much of the ride through the state in the dark.

I have several of these round the corner train pictures, it’s not that picturesque but at least I got the front car.

A day late with many new sights, sounds, friends and adventures under our belts, we arrive in Pennsylvania just as Autumn begins to show her lovely face. 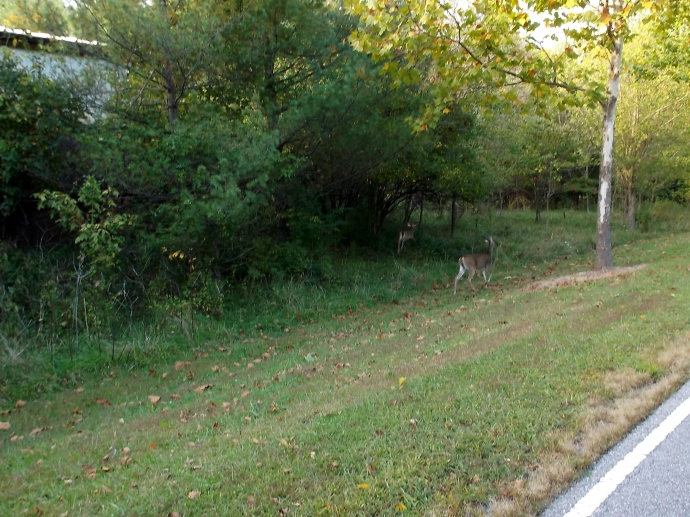 We did see several species of wildlife from the train, but they were definitely the butterfly pictures that got away.  Back in West Virginia, I caught these deer as we were in the car driving away from Harper’s Ferry, right back where we started from.