Posted on September 3, 2013 by awishcalledwanda
Taking a bus from Ankara to Cappadocia is to spend a lot of hours on a highway with little to look at except farm land with large fields and small equipment producing shredded wheat size hay bales in contrast to the size that is produced today in America. BUT, to arrive in Cappadocia is a treat for the senses that transports you to complete other worldliness.  The bus enters into small towns and as the riders get off we watch pedestrians go about their daily routines in and out of small shops and houses carved out of volcanic rock. It takes your mind to story book scenes and makes you want to smile and embrace the magical atmosphere even after a long ride.  Our destination is a large beautiful hotel built in the midst of these luring sights, but we will spend several days here touring and making moonscape memories. 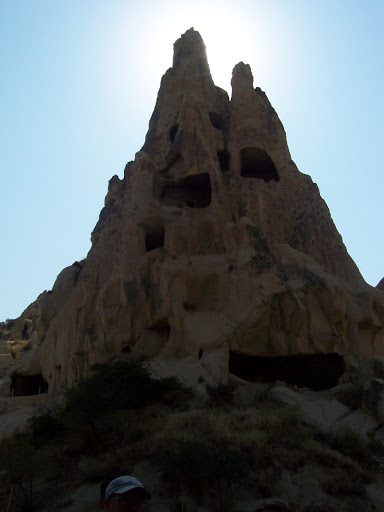 We toured several of the well known cave churches used in the 1st Century AD. Writing to the dispersing Christians, St Peter addresses Cappadocia in his first epistle in the Bible and salutes them with grace and peace.

This is known as the “Dark Church” and has many paintings of early Christianity and Bible stories that have been covered over and restored several times over. 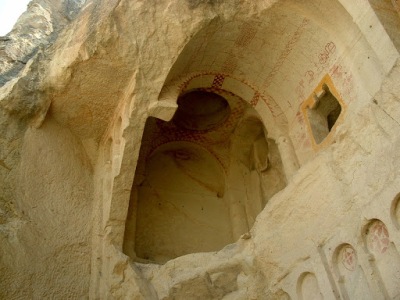 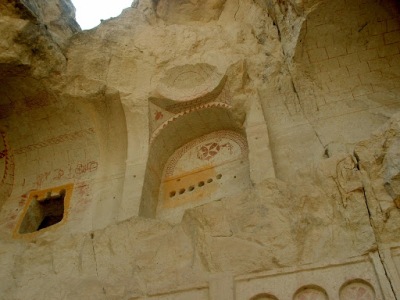 We spent the hot afternoon walking through the labyrinth of tunnels into underground rooms that had been dug out over 9 generations and used to hide only when the people thought they would come under attack. The tunnels were low, narrow and dark.  The enclosures at the end of the tunnels were at least 10 degrees cooler than anywhere else, and for a short time it felt like someone had turned on the air conditioner.

The rooms were small, with openings cut in to see into an adjoining room.  The doors were small and there were seats and/or shelves carved into some of them. There were torch light holes in every room.  What a thrill to imagine the antiquity of this place and the lives of those who had to escape here.

There are actually 5 miles of tunnels in the complex.  Let’s just say I’m glad we had a guide. 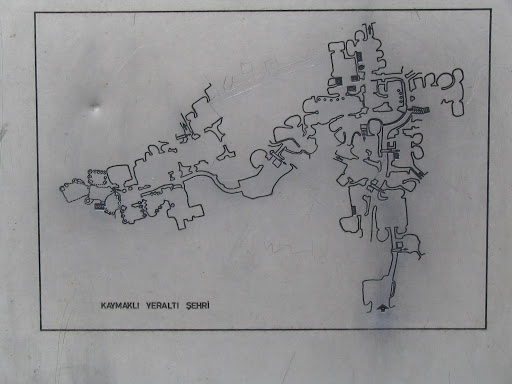 On the outside the temperatures were well into the 90’s, so every time you saw a hole in the rock you had the urge to climb in.

Then there was that very, very hot afternoon when we were scheduled to take a walking tour of Rose Valley. Armed with coolest clothing possible, good walking shoes and plenty of water, we got out of the air conditioned car about 10 minutes from the hotel and began our decent.

Down, as in almost straight down and except for the heat and the very real potential of slipping on loose stones, going down wasn’t bad until………..

We passed this and I wondered about the second story dwellers.  Did they have fairy wings???

If they did, I wanted a pair when I saw our next challenge.  No wings in site, so we took to the ladder. Going down backwards seemed the best alternative for the most of us. 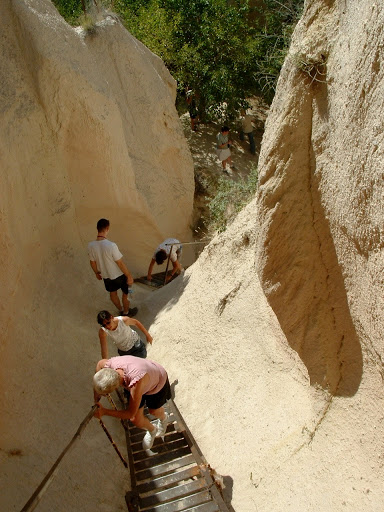 After that there were cool tunnels that twisted and turned as we went deeper into the valley.  We took short breaks in some of these tunnels that were so dark you couldn’t see anything but the light at the end of it,…. as soon as you turned the last corner.

At the bottom we found an oasis of sorts, some had tea, served by a man and two boys who made a humble living by serving hot tea to more than hot and tired walkers.  I passed on the tea.

Going back up was something I began to worry about when we finally got to the bottom.  We were informed that we were taking a short cut, but it was straight up.  I had to rest often, becoming over heated and somewhat short of breath.  At one point I felt it would help If I relieved myself of my upper under garment. So discreetly, while we were taking a break, I did just that and slipped the unmentionable into my pocket.  It didn’t help that much and as we neared the top, my fellow walkers got more and more concerned about me as my face was beet red.  I was alright and I knew it, but they didn’t.  When we at long last reached a point where a car could come to get us, they insisted we stay and wait.  I was all for that, but it took awhile and the redness of my face was still a concern. 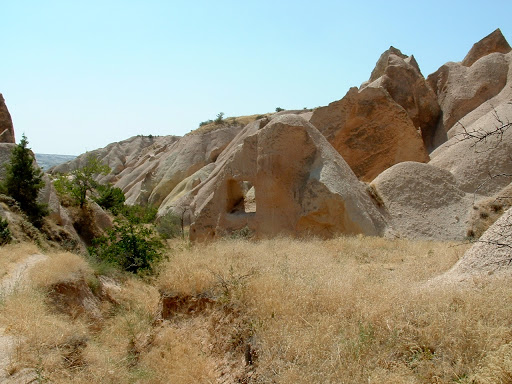 When they suggested pouring the remaining water over me to cool me down, I mildly protested and then the protest went up a notch or two until finally they gave a bottle of water to my husband, who knowingly poured it down my back.  I laugh now telling that story, but no way was I going to reveal my secret to mission workers, a man I had never met before and children.  I was fine, but, I must say, the pool back at the hotel felt more than refreshing upon our return.